The Tandem appliance is ideal for children and teenagers who have underdeveloped upper jaws with deficient upper lip and with an anterior crossbite. It is a fairly bulky looking appliance that is worn 24 hours per day for at least 7 months. The photo is slightly deceiving because there is a facebow which sticks out in front of the teeth which is only worn at night. During the daytime the appliance is totally inside the mouth and not as obvious. The appliance is fixed so compliance is not a problem except that the patient must wear elastics 24 hours per day for the Tandem to be effective. Despite the fact that it appears bulky most parents prefer this treatment for their children because in 95% of the cases it prevents the need for surgery at a later date. 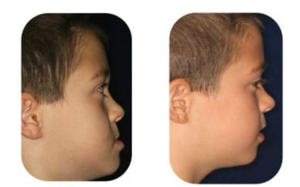 Visit our London, Ontario based Dental Practice for all your
Orthodontics, TMD, and Snoring/Sleep Apnea needs!