What is Sleep Apnea?

What is SLEEP APNEA?

Sleep apnea is a type of breathing disorder which is a serious, potentially life-threatening condition characterized by brief interruptions of breathing during sleep.

Factors that affect obstructive sleep apnea are as follows:

Children can also snore and suffer from obstructive sleep apnea. Often they are highly allergic and their airway is blocked due to enlarged adenoids, tonsils or swollen nasal mucosa. Clinical signs would indicate a turned up nose, allergic shiners under the eyes, mucous draining out of the nose, mouth breathing, and a nasal sound to the voice. Other signs are bed wetting, irritability, difficulty in concentrating at school and hyperactivity.

At the present time, obstructive sleep apnea is defined as a medical problem and the diagnosis must be made by a medical doctor or sleep physician (pulmonologist) who is specially trained in the area of sleep medicine.

The dental profession has an important role to play in the treatment of patients with snoring and sleep apnea. If 60% of men and 40% of women between forty and sixty years of age snore, this is a huge problem. Snoring is a serious social problem for the spouse, but obstructive sleep apnea can be a life threatening situation for the patient in that it can lead to irregular heartbeat, high blood pressure and strokes.

At the present time, obstructive sleep apnea is a medical condition that is being controlled and treated mainly by the medical profession. Despite the fact that in September 1995, the American Sleep Disorder Association finally endorsed oral appliance therapy as the third currently acceptable treatment method for snoring and sleep apnea, the vast majority of the medical doctors are not aware of the value of oral appliances.

As time goes on, the public is going to become more aware of the health risks associated with snoring and sleep apnea. It is the dental professionals responsibility to educate their members, the public and the medical profession about the important role that dentists and oral appliances play in the treatment of snoring and obstructive sleep apnea.

In 2006 in the January issue of the Medical Journal Sleep, the sleep specialists in the American Academy of Sleep medicine confirmed that:

The largest number of patients with sleep apnea (obstructive sleep apnea) are in the mild to moderate categories and should be treated with oral appliances.

Patients must have a valid sleep study at a hospital or private sleep clinic or a home sleep study.  This sleep study must be evaluated by a medical sleep specialist who will then send the report to the dentist who can then proceed to make the oral appliance. 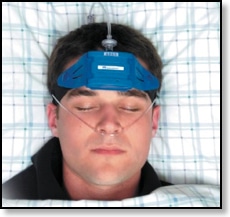 At our office, we send the patient home to sleep in their own bed with the home sleep study device known as the ARES.  The results of their home sleep study are then sent to a sleep specialist who makes the diagnosis.  The sleep specialist then sends a letter to Dr. Rondeau’s office and recommends the oral appliance or the CPAP device depending on the severity of the sleep apnea.

Sleep apnea occurs when the tongue falls back and blocks the airway for ten seconds or more.  Most patients have a more serious problem when they sleep on their back which makes it easier for the tongue to fall back and obstruct their ability to breathe.

Oral appliances are like upper and lower mouth guards which gently move the lower jaw and tongue forward to open the airway. 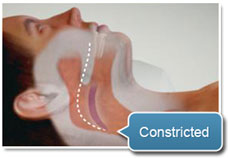 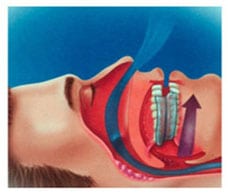 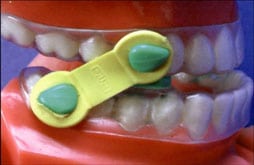 If there is still some evidence of sleep apnea the patient will be instructed to keep turning the screws (Dorsal Appliance) or advance the mandible further with the different side straps (EMA Appliance).  Then in a few months the home sleep test will be repeated until the snoring and sleep apnea problem has been eliminated.

In the cases of severe sleep apnea treated with oral appliances the patients are suggested to return to the hospital or private sleep clinic for an overnight study with the oral appliance.

Patients that are diagnosed with severe sleep apnea (obstructive sleep apnea) should be encouraged by the dentist and sleep specialist to wear the CPAP device since this is considered to be the gold standard for the treatment of severe sleep apnea.  This means that the patient stops breathing 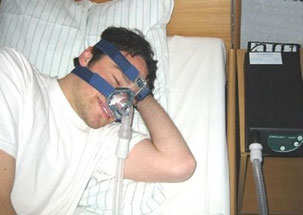 more than 30 times per hour for 10 seconds or more.  The CCPAP devicedelivers air to the patient’s lungs through a mask which fits over the nose or over the nose and mouth, via an air compressor and a humidifier.   The CPAP device is effective in opening the airway as the air pressure from the machine is gradually increased during the follow-up sleep study. (Polysomnogram, Hospital Sleep Study)  The air pressure successfully displaces the tongue, uvula and soft palate and allows an adequate amount of oxygen in the air to enter the lungs.

When the patient wears the CPAP device and the air pressure is tolerable by the patient it is often effective in eliminating the snoring and sleep apnea.  Patients who have severe sleep apnea and who are happy with their CPAP devices should not be encouraged to replace them with oral appliance therapy.  However, some patients have their results improved when they wear a combination of CPAP and oral appliances.

Oral appliances are mainly prescribed for the large number patients who cannot tolerate the CPAP device or who are diagnosed by the sleep specialist with mild to moderate sleep apnea.